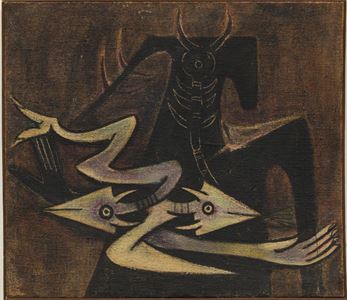 The internationally renowned Cuban painter Wifredo Lam (1902-1982) was a precursor of a cross-cultural style of painting, infusing Western modernism with African and Caribbean symbolism. His peripatetic life brought him into contact with all the avant-garde movements of his times―cubism, surrealism, CoBrA―whose incentives for greater freedom in art, for unleashing the unconscious, and for exploring the “marvelous” through automatic writing had great impact on his work. But Lam never lost sight of the world around him and like his friend Aimé Césaire took on the struggle “to paint the drama of his country, the cause and spirit of the blacks.” He invented a highly original voice that speaks in the name of “defending human dignity” and “saluting freedom.”
In 2015 a retrospective exhibition of his works opened at the Centre Georges Pompidou in Paris; this exhibition later travel to the Reina Sofia Museum in Spain and the Tate Museum in London afterward.