Holden Luntz Gallery exhibits a dynamic range of vintage and contemporary American and European photography. The present gallery was founded in 1999 in Palm Beach, Florida with the mission of acquiring and presenting the work of significant photographers whose work has either defined or is expanding the parameters of fine art photography. The aesthetic range of the gallery is varied. We have presented photographers working in the following genres: portraiture, photojournalism, fashion, ethnography, still-life, landscape, figurative, conceptual and alternative process photography. Exhibitions have ranged from classical photographers such as Henri Cartier-Bresson, Brassai, Andre Ketresz, Berenice Abbott, Horst P. Horst, and Jacques Henri Lartigue to contemporary photographers such as Harry Benson, John Dugdale, Elliott Erwitt, Sheila Metzner, Bruce Davidson, and Bruce Weber. We are a member of the Art Dealers Association of America.

Terry O'Neill Frank Sinatra, Miami Boardwalk (Fontainebleau)
Taken on the set of the 1968 film, Lady in Cement, Terry O’Neill’s first encounter with the legend not only produced a series of photographs but was also the start of a working relationship between Sinatra and O’Neill that would last nearly 30 years. “After that day, I could go anywhere with Frank. He allowed me to become a better photographer by simply letting me do my job. It was a real honour to work with the man, a privilege.”

When O’Neill first started to offer his photography as fine-art, editioned prints, “Frank Sinatra on the Boardwalk” quickly became his seminal bestselling image.

“My memories of this moment, the first time I met Frank Sinatra, are with me to this very day, nearly 50 years later. I remember how nervous I was to finally meet Sinatra. And I remember the colours of the Miami sky and how blue the ocean was.” 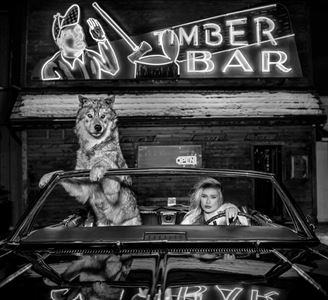 David Yarrow Coyote Ugly
"Any town with a name like Big Timber immediately grabs my attention. It just sounds like a place with an interesting past. As it is, this modest community of 1500 to the west of Livingston in Montana, is a little run down and sleepy. It is nestled between the Crazies mountain range to the north and Yellowstone to the south and most people simply pass it by.

However, in trawling the internet, we discovered a saloon bar in the high street with neon signage on the facade that caught my interest. We visited the location and there was certainly potential, but clearly the shot would have to take place at night.

There was then an immediate problem, as we discovered that the bar was the central congregation point for all the mountain men - not just from Big Timber, but from far and wide. To bring a wolf and a Victoria’s Secret model to the entrance and shoot when the bar was open, was simple asking for trouble.

The only viable option was immediately obvious - to shoot at 5 am, when hopefully most of the clientele had had enough, though in Montana, one can never be sure. Normal drinking hours don't apply in this state.

As it was, we were okay and the bar owner agreed to keep the neon lights on for us. The next issue was simply that when we were in position, it was around -20 degrees - fine for the wolf, but a little chilly for California’s Josie Canseco.

She is, however, a trooper and we got the job done. My narrative was simply that the couple had hooked up inside the bar and were rushing home. The wolf certainly looks like he has a smile on his face - who can blame him." - David Yarrow

Singer and actor Frank Sinatra, with his minders and his stand-in (who is wearing an identical outfit to him), arriving at Miami beach while filming, ‘The Lady in Cement’, 1968.

Estate of the artist

Renowned for his impactful, close encounter photography of wildlife and the environment, David Yarrow’s work has demonstrated the ability to capture wild animals in their natural habitat to create images full of passion, drama, and empathy. David Yarrow is distinguished for his resilience in the field. Whether his pictures require setting up camp in the wilderness of Alaska or being locked in a cage surrounded by Siberian Tigers, it is Yarrow’s determined focus and commitment to excellence that allows each of his pictures to have a life and story of their own. Indeed, Yarrow’s final images take patience and technical skill. He thoroughly researches his photography’s logistics before embarking on an adventure and beginning the physical process of locating and executing the perfect shot. Equally popular are the constructed photographs David elaborately stages, which often nod to great American cinema. These pictures are full of surprises and become visual adventures involving celebrities and trained animals.

David Yarrow was born in Glasgow, Scotland, in 1966. He took up photography at an early age. As a 20-year-old, he found himself working as a photographer for The London Times on the pitch at the World Cup Final in Mexico City. On that day, David took the famous picture of Diego Maradona holding the World Cup and, as a result, was subsequently asked to cover the Olympics and numerous other sporting events. Many years later, David established himself as a fine art photographer by documenting the natural world from new perspectives.

David’s evocative and immersive photography of life on earth is distinctive and has earned him an ever-growing following amongst art collectors. He is now recognized as one of the best-selling fine art photographers globally.

African imagery is at the heart of the project Encounter, exhibited in November 2013 in Hong Kong, New York, and London’s Saatchi Gallery. He is the author of four photography books: Nowhere (2007,) Encounter (2013,) Wild Encounters (2016,) and David Yarrow Photography: Americas Africa Antarctica Arctic Asia Europe (2019.) He was shortlisted for the Wildlife Photographer of the Year Award for 2013. His photographic travels have given him genuine insights into key environmental and geopolitical issues. This knowledge is put to practical use in his long-term commitment to Tusk, a leading African conservation charity whose Royal Patron is HRH, the Duke of Cambridge, for which he is the affiliated photographer. Yarrow continues to travel throughout the world, photographing many of the planet’s most remote and beautiful locations.

• Museum of Natural History, Missouri, US

Studio of the artist