While the gallery space in Dronningens Tværgade serves as our headquarters and showroom, In The Gallery is also very involved in the international art scene through annual participation in several major international art fairs.
The exhibition programme is created by in-house or visiting curators. In addition to showcasing innovative art, we also host artist’s talks, and other interactions between artists and audience. 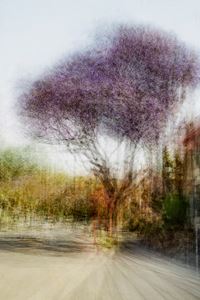 Jacob GILS LA # 2
Whether turning his eye to iconic structures and landscape sceneries or to the female body, Jacob Gils creates fragmented, draped and deconstructed visual puzzles, with a strong attention to both aesthetic expression and technical detail.
The project Movement gives visible shape to the relationship between the concrete physical movement, taking place in the production phase and the established environment chosen as content. Through the use of multiple exposures Gils generates engaging interpretations of iconic structures and landscape sceneries.
At first glance these multi-point images appear out of focus or shaken, but in fact they consist of many different very sharp photographs of the same motifs, which are carefully combined to offer an illusion of being on the go – in movement. The technique invites the onlooker to come closer and discover the details, which do not fully reveal themselves from a distance. The hazy, translucent shapes created by the technique make for a photographic style that resembles impressionistic painting while still retaining all the detail of modern photography.

Jacob Gils´ photographs, equally analogue and digital in origin, embody a strong awareness of perfect technique and composition. The artist’s significant almost impressionistic style of iconic structures and sights makes his photographic works stand out with their layered production technique. The used polarisation method and multiple exposures generate engaging photographic interpretations that are organic and sensuous to the eye. Fragmented, draped and distorted they demand the onlooker to not only look at them, but also to get closer and pay more attention to the details as they never reveal themselves at a distance.

In 2011 Jacob Gils began working on Movement, an ongoing serie dedicated to pushing the boundaries of modern photography. By using a special technique, multiple exposure Gils lets a world of movement reveal itself in his dynamic and captivating photos. A first glance the multi-point visual puzzles appear unfocused and shaken, but they are in fact many different very in-focus photographs of the same thing selected and carefully layered so they in the end give us the illusion of being on the go – or in movement. The layering of exposures often also creates a translucent second shape and results in a photographic style that, at first glance, resembles impressionistic paintings, but at a closer inspection reveals the details of modern photography.

Jacob Gils confronts both Danish photography and in a broader sense Western photography and art. He enfolds a photographic style that demands further investment from its onlooker. He questions his own artistic allegiance as well a that of the photographic genre and his art represents a social phenomenon that is at the very heart of contemporary art dialogue today. It balances on the edge of reality and dream, the abstract and the realistic.
Jacob Gils was born in Copenhagen in 1963 where he continues to live and work as a photographer.

Artist studio
In The Gallery, Copenhagen

At first glance Stephan Schnedler’s series Unreal Reality appears to be an architectural study in light, shadow and the effect they have on a selection of modernistic rooms and surfaces. However, the images are actually showing constructed and staged models build with simple materials such as cardboard and paper, and lit in the artist’s own studio. Schnedler elegantly plays with the viewer’s perception of space, scale and materiality, and creates an intimate atmosphere, which draws the viewer further in. With the emptiness of the depicted spaces one is led not only to consider what is in the picture but also imagine what might exist beyond the frame of the motif.
Stephan Schnedler (b.1984) lives and works in Copenhagen. He was educated at the School of Photography Copenhagen in 2010 , and has worked with the photographic medium since 2004.

Artist studio
In The Gallery, Copenhagen