“Old school” in his technique, Nathan is able to marry the contemporary with the traditional for truly one-of-a-kind pieces of fine art. Using rich contrasts and dramatic lighting, Nathan’s images take you on a journey throughout the frame. With his creativity and passion extending well past the initial click of the camera. Nathan Coe’s images have been featured in Vogue, Town & Country, Billboard and more. Nathan’s 2014 Double Exposure Exhibition at Cavalier Galleries took Nathan to new heights in the world of fine art. Inspired by Nantucket, Nathan wanted to show a new dimension of the beautiful landscapes he had long been shooting. Nathan’s appreciation for the sensual beauty of the natural landscape gave him the idea to overlay the female form on the landscapes to tell a new story. Inspired by the work of Jeanloup Sieff, Helmut Newton, and Peter Beard, he crafts compositions in which the shape of the landscape complements the sensuous curves of nude women, to the extent that both are equally central to the composition. The end result is a captivating, provocative, one-of-a-kind piece of fine art. With the large-scale photos being editions of one, these pieces are truly a collector’s item. Though Coe prefers film photography for its slow, meticulous nature, he digitally shoots his double exposures. In Coe’s latest work, he has introduced the nude female form into his imagery by photographing his models on site. In his intriguing and provocative new work, the figures are seen in the grand entrance to the Breakers Hotel in Palm Beach, gazing off the deck of the Nantucket ferry, or heading down the iconic path to Steps Beach in Nantucket. Nathan’s passion for photography began at University, graduating with a BA Hons degree from Gloucestershire, England in Photography and Media. Nathan then moved to Nantucket where he made a name for himself as the Creative Director/Editor of N Magazine, leading the team through a rebrand, cementing N Magazine as a hugely successful destination publication. Nathan left N Magazine to pursue his fine art photography full time. He now splits his time between Nantucket and Palm Beach. 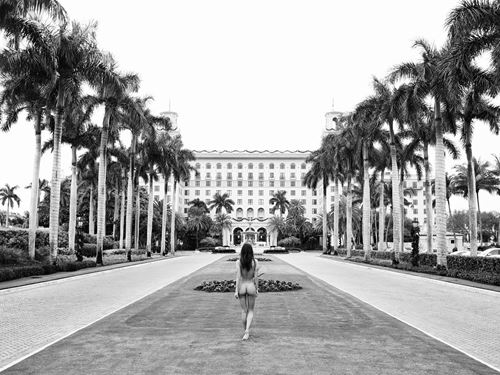