Born in upstate New York in 1952, John Van Alstine grew up in the southern Adirondack Mountains. After attending St. Lawrence University, Kent State University (BFA 1974) and Cornell University (MFA 1976), he joined the faculty at the University of Wyoming, Laramie, and later the University of Maryland, College Park, to teach drawing and sculpture.

In 1986 he left teaching and moved to the New York area to pursue studio work full-time. In 1987 he purchased a 19th century industrial complex on the banks of the Sacandaga River and returned to the Adirondacks where he now lives and works in the restored historic structure.

Van Alstine's work is held in many private and public and corporate collections in the United States and Europe. He has completed many large scale outdoor, site-specific commissions.

The union of stone and metal—recently rough-hewn New York slate and found object steel—are central in my sculpture. On its most basic level, the work is about the marriage of the natural with the human-made.

Stone is used as an assemblage element in the way a welder uses steel, rather than in the traditional manner of subtraction. In contrast to the timelessness of stone, the found-object steel is very time-specific—20th century industrial. The industrial and structural characteristics inherent in the metal are often employed in the work and used to physically connect or suspend stone elements. The strength of the metal allows for a "choreographing" or "floating" of typically earthbound stone.

The Sisyphean Circle Series is an attempt to draw parallels between the Greek mythological character and the plight of the artist. As we all know, Sisyphus was forced to roll a large stone up a steep hill, only to have it tumble back after reaching the top. A toil that lasts an eternity is an applicable metaphor for the creative process—especially for a stone sculptor, on both a physical and symbolic level. I am constantly pushing stone around the studio, striving to reach a creative "peak", and once there, start over on the next piece. The process is neverending.

Albert Camus, the French existentialist, in his essay The Myth of Sisyphus, used this myth to illustrat his notion that reaching one’s final destination is not of utmost importance. In fact, if one "reconsiders Sisyphus", as Camus suggests, the struggle or journey reveals itself as, ultimately, the most meaningful—an idea that I, and many others, believe is central to the creative process. 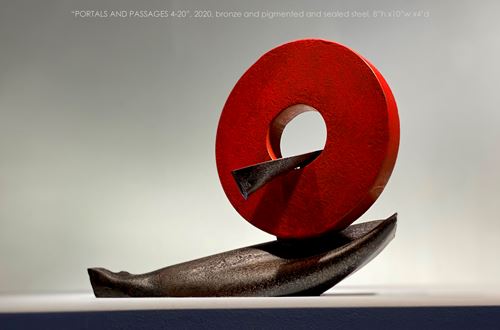 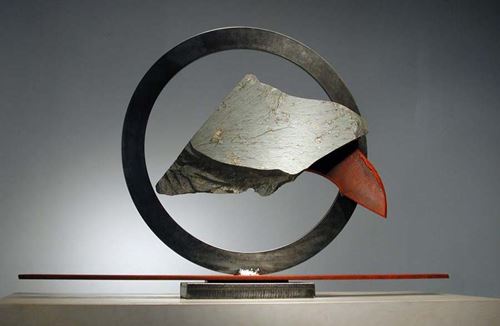