Born in the Soviet Union, in the city of Yessentuki, he graduated from State Repin Academy of Art in St. Petersburg. Yershov's art received international recognition when he joined Furmanny Lane in Russia, Europe and the Americas. His works have been shown as part of the international Art Armory Show, auctioned in Sotheby's and Phillips houses, and held in many private collections and museums. Yershov is a co-founder of the Russian Art Pavilion organization. In his ironic realism, Yershov utilizes exaggerated figures, rich textures and bright colors. His flamboyant paintings strike and amaze the viewer's imagination, appealing on both analytical and emotional levels while illuminating many aspects of human experience.

Throughout his life, Yershov has experimented with a multitude of different techniques and media such as painted sculptures made from handmade clay, oil on canvas, needle and thread, etc. Today Valery uses a combination of carved wood, resin, ink, oil, acrylic, and pouring medium to craft truly unique artworks from his latest collections “Seaside”, “Underground”, and “Ambience”.

Yershov’s work has been reviewed in the New York Times, Los Angeles Times, the Village Voice, and the Daily News among many other publications. Yershov’s works were displayed in the collections of Gianni Versace, Mikhail Prokhorov and Lady Gaga as well as other private international collections. Selected public collections include Jane Voorhees Zimmerli Museum, New Brunswick, NJ; Kolodzei Art Foundation, the Ludwig Collection and others. 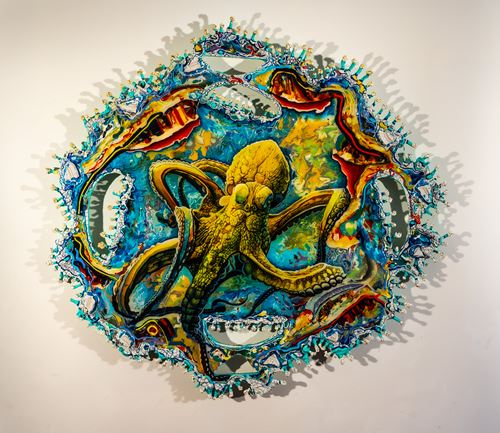