« What on earth was he doing in this mess ? »
Molière, Les fourberies de Scapin

Sculpture would be this initial gesticulation which is an attempt to extricate oneself from the absurd and incomprehensible context of human life, from the tragedy of its finitude, suspended between birth and death, an initial often awkward gesticulation as an appeal for meaning, and which takes the form, for Fondacaro, as a hint of a dance step which would liberate the body of man
from the laws of gravity…
Then, because a first step engages another and then another, launches him on the long journey of constructing a path, onto which this first step would have unwittingly lead, then carried him away in a mad desire for weightlessness.
This path is certainly perilous and demanding, and leads in an ascending movement, alleviating all certainty as to where lies the center of our gravity, the vertigo of doubt, that which is implicit in every ascent. Only daily exercise will mark this path of elucidation, with cairns as sculptures which day after day indicate, if not a sense, a direction taken, and serve as a thought point in the
backward step required to avoid giving up.
This thought will henceforth articulate the lines that these body sculptures trace in space, thus freeing themselves from the vagaries of a suffering psychology or of an haughty ambition, deviations of the art of our times, so that In return it responds to an internal and autonomous logic. Thought which will give the line of the writing which will develop of itself, prompt to changes, capable of opening the latter, beyond any representative or expressive will, according to its own vitality.
There begins the mystery where the writing surprises him and impels to recognize the form which it imposes upon him, as though in spite of himself.
Speaking of his work, Louis Pons wrote derisively this aphorism which could equally well apply to Fondacaro:
« He thinks he’s half bird, that’s his problem ».
Thus it would be here, that which leads the sculptor to follow the difficult vector of thought leading through the purity of verticality, testing his own limits.
It would be at this nodal point of threat of disappearance of even that of form, now arises the necessity of incarnation in a body which multiplies, agglutinates, solidarizes, confounds, clones, resumes this initial movement in a new direction, reviving the first gesture, reactivating the thought from another point of view, no longer that of a yearning that has become painful and vain, but that of a reversal, a revolution which no longer takes the work as an object, but confers it a subject, be it multiple, anonymous, like a cohort in which the solitudes are tied into a monstrous conglomerate whose absurd movement would be the ultimate
effort to give meaning to this desperate flight.
In the movement of the bodies the artist seems to question the essence which inspires the necessity to create his work, faced with the expression of such fragility and strength, humanity and monstrosity, nudity and modesty. His viewpoint prevails and is important to us. 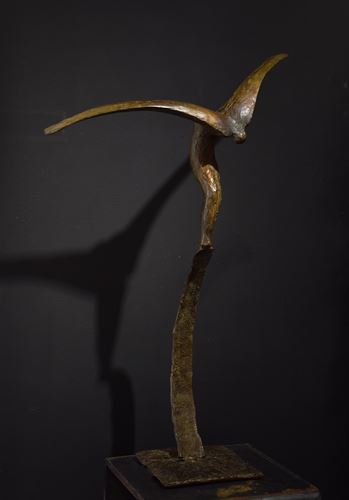